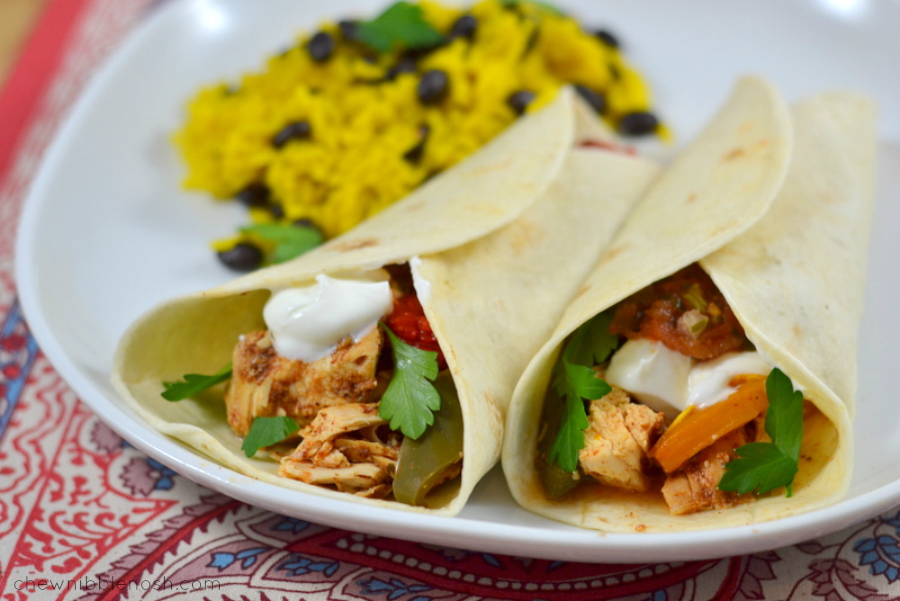 We’re in the home stretch!  At the close of the school day tomorrow, it’s officially summer here in the Carlisle household.  Every school year seems to fly by faster than the last, and this year, even the kids have noticed.  It’s been a great year, and I’m having one of those Mommy moments as we finish things up.  After tomorrow, my girls will officially be fifth and eighth graders.  One will be on her way to her last year in elementary school, while the other will be moving into her last year of middle school. What was I thinking when I spaced my children out this way?  This is too much parental emotion to take on in one year.  I don’t feel fully prepared to have a high schooler yet.  After all, I was changing her diapers and feeding her smashed peas just yesterday, it seems.  And the youngest moving out of elementary school?  Ugh…I’m not ready to throw my baby to the wolves quite yet.

Thankfully, I still have a year to prepare for both events, but they’re on my mind nonetheless, and I’m already getting sappy about them.  Next year at this time, prepare for some emotional, sob-wracked posts.

For now, we will anticipate summer and all it has to offer.  Alarm clock free days, pool time, visits from friends and family, beach vacations, and the occasional camp where the kids learn and grow, and mom regains a little sanity.

This simple slow cooker meal is perfect for a summer day when you’re headed to the pool and don’t want to deal with cooking dinner once you’re back home, or in all honesty, any day where you’re busy and don’t feel like cooking dinner when you get back home.

I love chicken fajitas, and my family does too, so when I saw this recipe for a big batch of them courtesy of my slow cooker, I had to give it a try.  The result was quite tasty, fresh, and simple.

I started by prepping my veggies.  I sliced up red, orange, and green bell peppers, minced up a heavy hand of garlic, and sliced up a sweet onion. 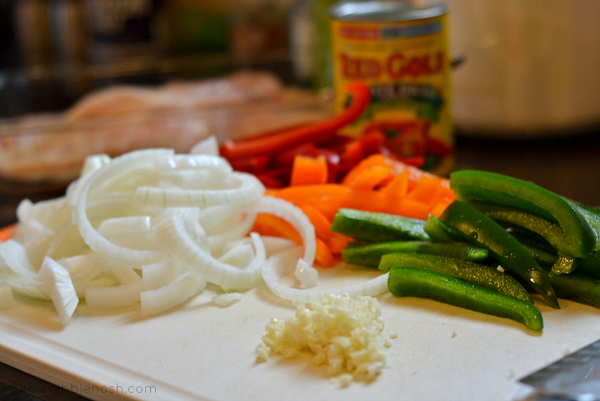 In a small bowl, I mixed up my own fajita spice mix.  It was a combo of chili powder, paprika, cumin, coriander, salt and pepper.  Nice and warm, but not too terribly spicy. 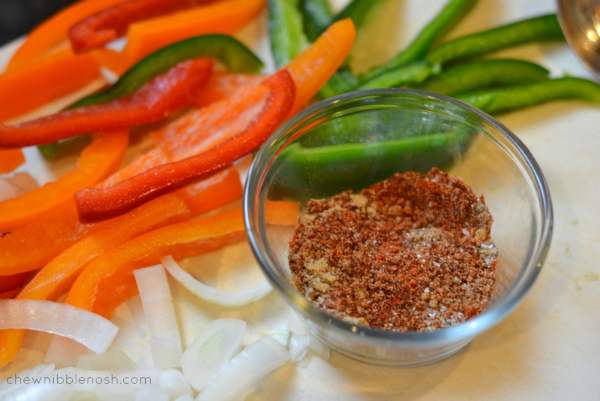 Into my slow cooker, I poured half of a can of diced tomatoes with green chiles.  I spread it around a bit, and then layered in half of the peppers and half of the onions, and then I sprinkled all of my garlic on top. 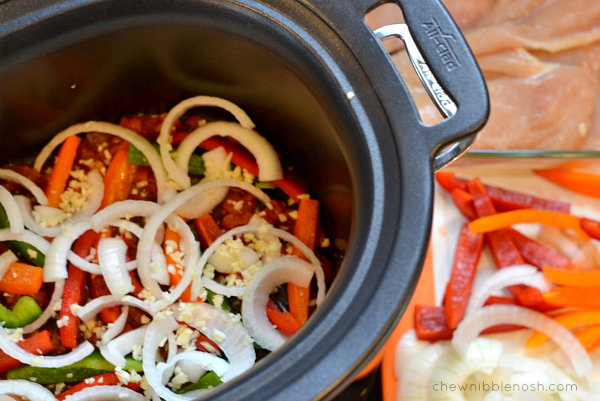 I cooked the chicken and veggies on low for about six hours.  Once the chicken was tender, I removed it from the slow cooker and sliced it into thin strips. 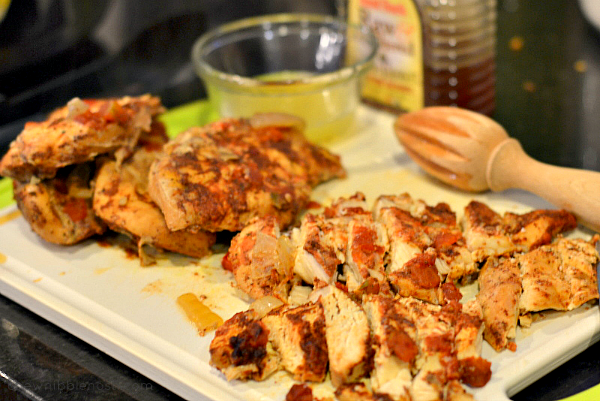 I removed a bit of the liquid from the veggies in the slow cooker, and then added my chicken back in before stirring in some fresh lime juice and a bit of honey, which brightened up the veggie flavor and gave the whole dish a little pep in its step before I served it up.

I piled the chicken, peppers, and onions into warmed tortillas and served it with salsa, sour cream, cheese, cilantro, and guacamole.  They tasted light and fresh, and my entire family enjoyed doctoring them up the way they wanted, just like in our favorite Mexican restaurants!  This version felt a bit healthier though, since it wasn’t sizzled in oil.  Presentation may not have been as dramatic as the restaurant version, but we certainly enjoyed it just as much. 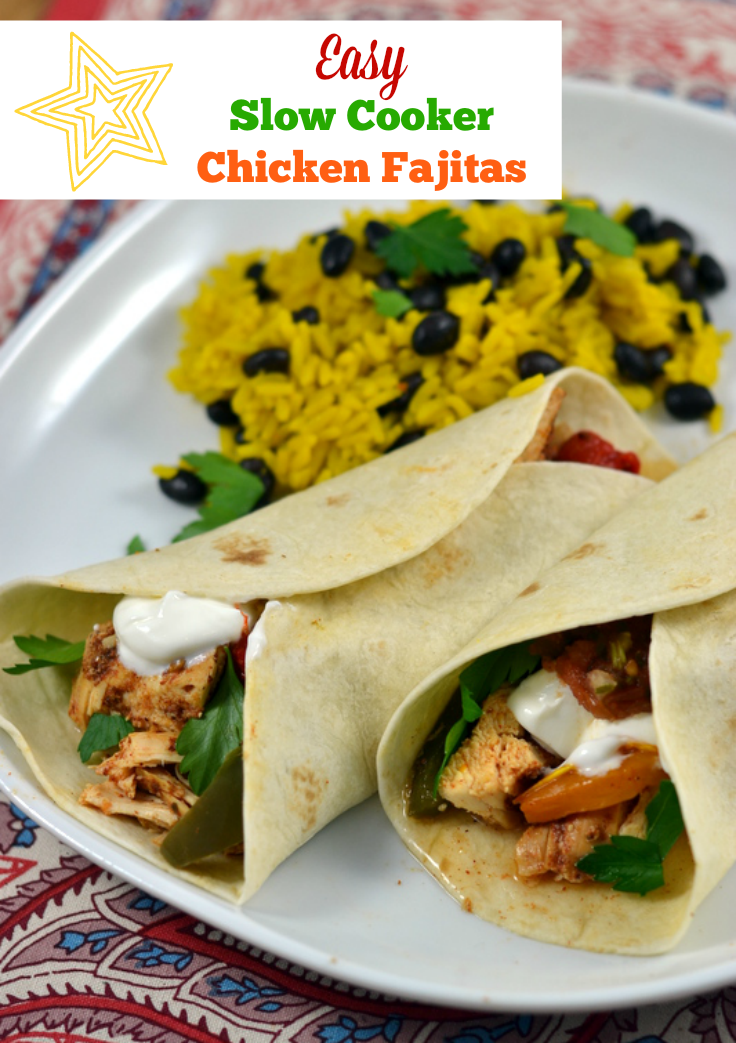