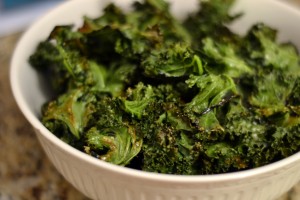 Before you say, “Christine, I just read the name of this recipe and it sounds disgusting”,  just hear me out.  I know that when most of us think of kale, we think of the green stuff that’s occasionally floating around in a pot of soup or, most often, the curly stuff that’s used as a garnish when we go out to eat.  After years of sitting on the sidelines, kale is finally being recognized as the super-good-for-you-food that it is!  Kale is one of the healthiest vegetables you can eat and one you should really try to “force” upon your children.  For more on that, click here.  Thankfully, because of this recipe, I don’t have to force mine anymore!

I first tried this, not because it sounded good, but because the local CSA (Community Supported Agriculture) group that we had joined placed a giant box of fresh kale on my doorstep one morning.  One of the reasons we joined a CSA was so we’d be forced out of our usual vegetable routine and we certainly were!  We were treated to local, fresh grown produce that was appropriate for the growing season we were in.  Winter brought kale…a lot of it.

I ran across a recipe for baked kale chips online and decided to give it a try.  My family was skeptical, might have actually looked at me like I was crazy, but they are now kale chip converts.  I’ve played around with the recipe to find our favorite version, which I’m sharing with you today.  My girls can’t get enough of them!  Between the two of them, they could polish off an entire head of kale (or two, if I had the oven space) this way.  (Yes, even the picky one likes them.) Since that first, skeptical night, I’ve made these chips countless times.  Most of the time, the chips don’t even make it into a bowl because the family runs into the kitchen and grabs them right off the cookie sheet.  Before I know it, they’re gone!

I start by washing and trimming up a head of curly leaved kale.  Kale has a very thick stem that can easily be removed with a nice sharp knife. Once trimmed, I tear up the leaves into large pieces and throw them all in a large bowl.  There, I toss them with just a bit of olive oil before laying them out on a couple of greased cookie sheets.  I sprinkle them with kosher salt, a bit of pepper and just a little Parmesan cheese. Then they are ready to pop in the oven!

After about 15 minutes, I have perfectly baked, crispy kale chips for my ready and waiting family.  For the sake of the blog, I was even able to get them into a bowl for picture-taking this time.  They didn’t last too much longer after the photo was snapped, though!  The girls dove right in. Now, before you ask, are these dip worthy chips?  No.  They are pretty thin.  They are a fun way to get more veggies onto your plate at dinner time, though.  Kids always like to eat with their hands, right? Give them an excuse to do so!  I really hope that I’ve swayed you and that you’ve gotten past the rather grim title.  If you try these with your family, let me know what you think!