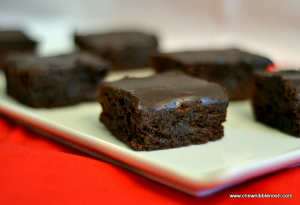 Yesterday was just one of those days that called for a hefty dose of chocolate.  I couldn’t get away from it.  It had to happen.

I came across this recipe for Mexican Hot Chocolate Brownies a while ago and have been saving it for one of my “Ugh…ME NEED CHOCOLATE” days.  It was the perfect thing.

Have you ever had Mexican hot chocolate?  Mexican hot chocolate differs from our, traditional hot chocolate in that it’s often a darker chocolate, spiced with vanilla, cinnamon and sometimes a little chili pepper.  Don’t let those savory spices scare you off.  They pair beautifully with the chocolate and add even more warmth to an already cozy treat.  When I saw a brownie version, I had to investigate further…for you.  It’s all for the good of my readers, right?  Nothing selfish at work here! (wink wink)

I started by mixing together my dry ingredients, which included a bit of cayenne pepper and cinnamon.  I also melted together some unsweetened chocolate and butter in the microwave. 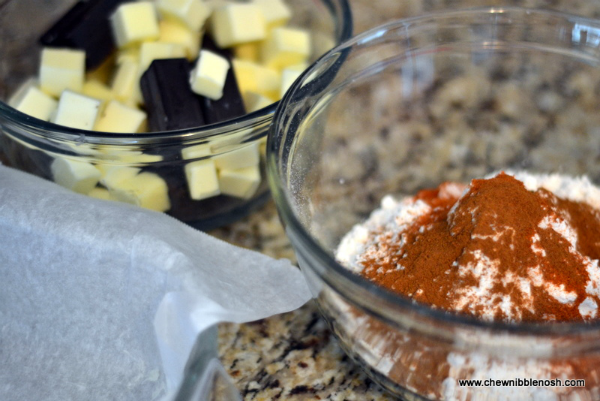 I also buttered and lined my 9×13 inch baking pan with parchment paper.  Then I buttered the paper to ensure that every last bit of those brownies would make it out of the pan safely.

Once the chocolate and butter was melted and smooth, I poured it into my stand mixer bowl, blended in some sugar, eggs and vanilla, and then added my spiced flour mixture to the bowl.

Once it was blended nicely, I poured it into my prepared pan.  It was thick, and ooey gooey.  I had a feeling wonderful things were about to happen. 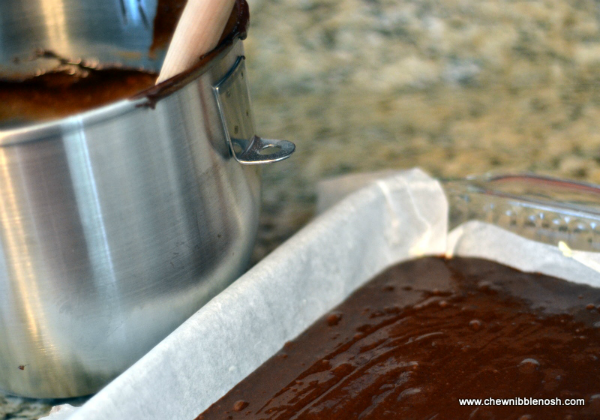 After about 30 minutes in the oven, the brownies were done, and I let them cool for a few minutes while I whipped together a super easy ganache frosting.

I melted together some semisweet chocolate with a bit of whole milk in the microwave and stirred it up until it was nice and smooth. 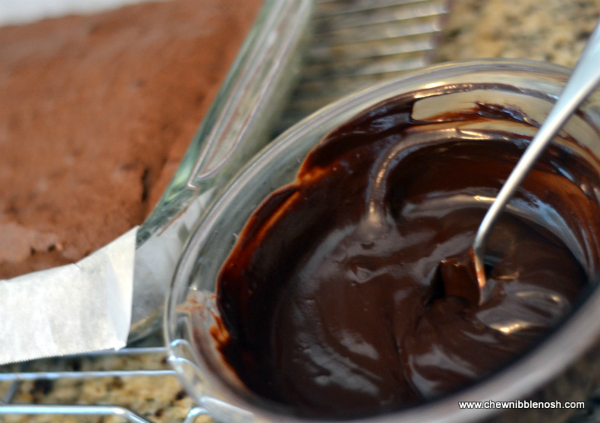 *While you’re making the ganache, if it seems as if the chocolate is lumpy or “seizing up” on you with the liquid, just keep stirring.  Once the liquid and chocolate realize that they are perfectly proportioned for each other, it will be smooth sailing.*

I poured the ganache over the brownies and let them cool completely on the counter, before moving them to the refrigerator for about an hour or so.  Chilling the brownies helps that ganache to set up nicely, and it also makes slicing the brownies a bit easier.

When I was ready for dessert, I carefully lifted the brownies out using the parchment paper and sliced them up with a large, sharp knife.  These are super fudgy, thick brownies, so dipping the knife in some warm water and wiping it off in between slices helps a lot.  They are easier to cut when cold, but taste better at room temperature, so let them sit for a few minutes before diving in.

These brownies are AMAZING.  They have the perfect amount of spice, and a whole lot of fudgy, which made them the most excellent cure for a chocolate craving.  They are quite rich, so a little goes a long way.  I was really curious to hear what my girls would think of them, since these aren’t the mild mannered brownies they’re used to having.  Avery said they were the best brownies she’d ever had.  Emily just made a lot of “Mmmmmm” noises as she ate.  I’m guessing that means they went over pretty well! 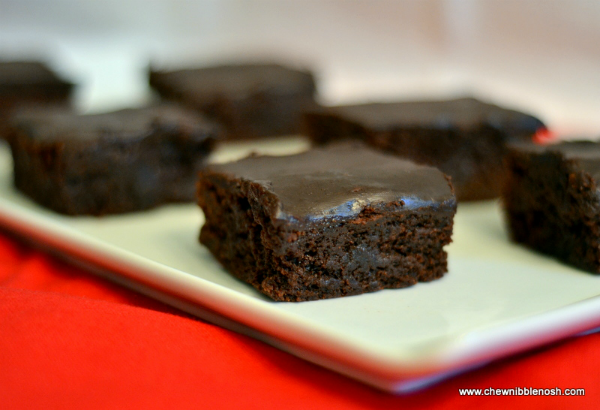 Adapted from Confections of a Foodie Bride