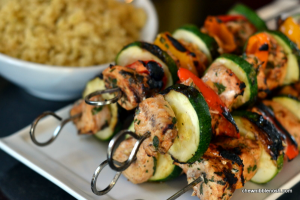 I need to apologize to the kebab.

It’s rare that I make kebabs, and I honestly don’t know why.  Talk about an easy weeknight meal!  Or, they’re perfect for entertaining.  Plus, with the meat and veggies taken care of, it’s almost an entire meal on a stick.  Everyone loves food on a stick!  Why don’t I do this more often??

After making these last night for dinner, and listening to my husband repeat over and over, and over again how much he enjoyed them, (he’s all about the subtle hint), I have a feeling I’ll be breaking out the skewers more often.

I started by cutting up one pound of boneless, skinless chicken breasts into one-inch pieces.  I mixed together a quick, but flavorful marinade of nonfat plain yogurt, chopped parsley and cilantro, lemon juice, olive oil, fresh minced garlic, paprika, cumin, salt and pepper.  I mixed the marinade ingredients together and then tossed it with the chicken pieces. 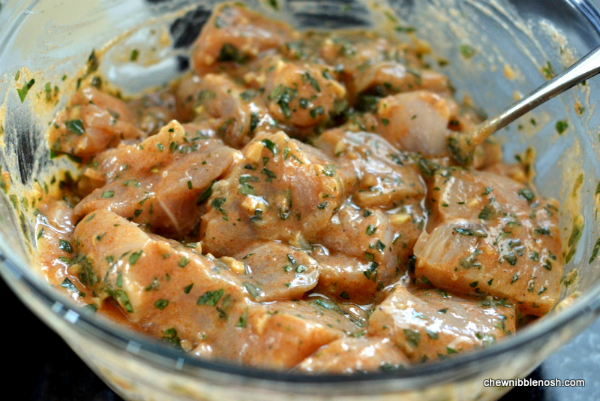 I covered the bowl and let it all hang out together in the fridge for about twenty minutes, while I prepped my veggies.

I sliced up two good sized zucchini and instead of using the red bell peppers suggested in the recipe, I cut up some of those sweet, mini peppers that I’ve managed to fall in love with recently.  They are my new favorite snack, and now they’ve broken into dinner. 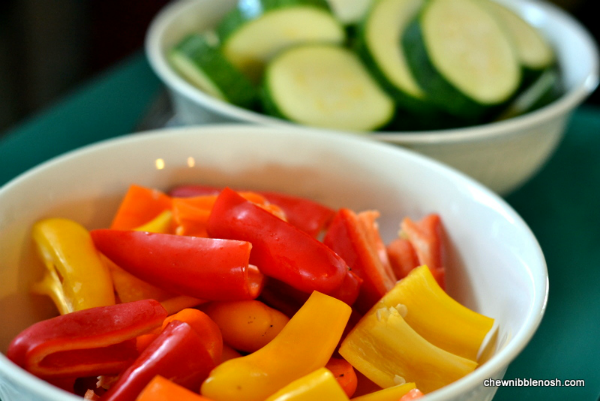 I blanched the veggies in boiling, salted water for just a minute to soften them up a bit.  The chicken doesn’t take long to cook on the grill, since it’s cut into such small pieces.  Blanching the veggies assures that the veggies will be nice and tender as well when they come off the grill.

Once the veggies were through the blanching process, I put my kebabs together, alternating the chicken pieces, peppers and zucchini on my skewers. (If you’re using wooden skewers, don’t forget to soak them in water first so they don’t burn on the grill.  Soak them while the chicken is marinating.) 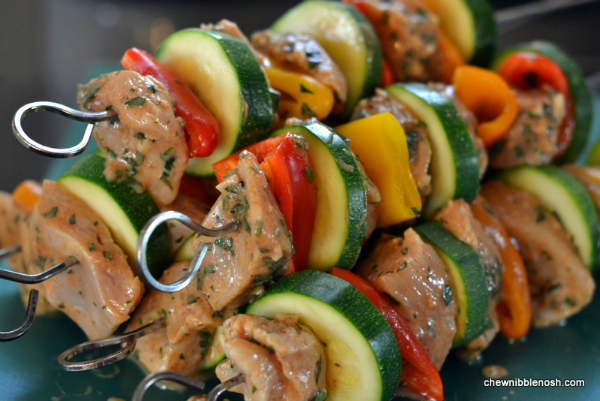 At this point, I handed the kebabs over to the Grill Master (my husband), and while he tended to them for a few minutes, I made some couscous to serve along with the kebabs.

Less than ten minutes later, we were ready to sit down to dinner!

The kebabs were delicious, and I think I’ve found a new favorite marinade.  The chicken was so flavorful, even with such a short marinating time.  It’s tangy and zesty, with just a little kick to it.  Not enough to scare away the kids, though.  It was incredibly tasty alongside the zucchini and peppers.

I’m so glad I broke out my long-forgotten-about skewers.  I just need to remember to use them more often.  How simple was this? 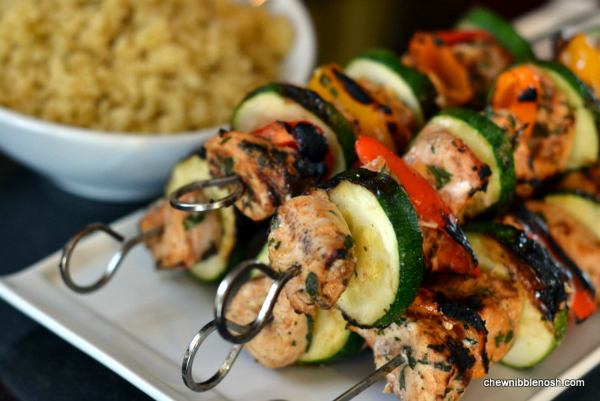 My family is getting bored with my repertoire, so I’ve been looking for some more flavorful recipes from different places. I found your site by accident and started hunting around. Excited about all the recipes I can try. This is one I’m looking forward to!

Welcome! I hope you enjoy them!