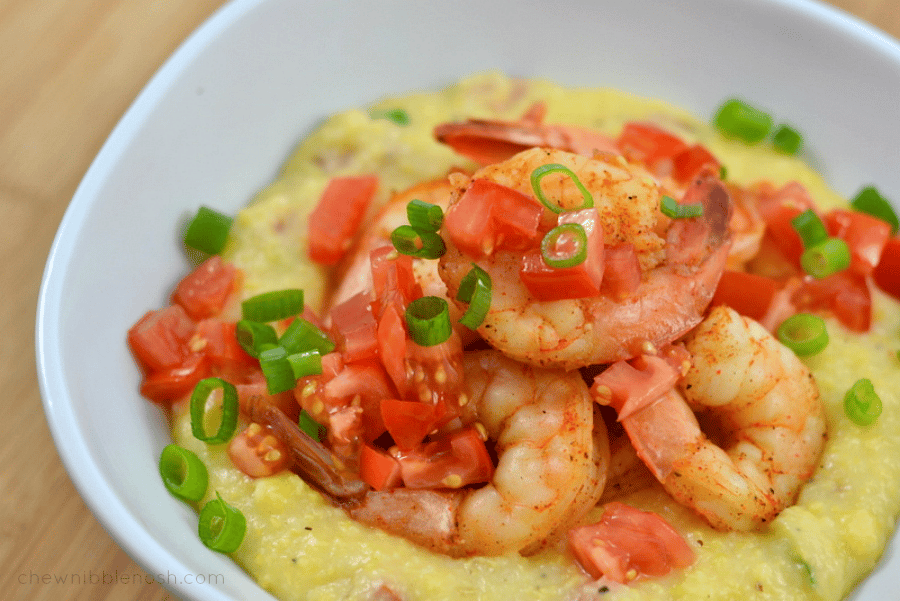 I know what you’re thinking.  Shrimp and Grits in a rice cooker?  I thought exactly the same thing.  But, when my friends at Hamilton Beach offered me their spectacular, multi-functioning 4-20 Cup Rice and Hot Cereal Cooker to try, and then suggested this recipe for Rice Cooker Cajun Shrimp and Grits, I thought, why not!  After all, this rice cooker isn’t your average rice cooker.  Sure, it cooks rice. Every size and variety. But it also cooks oatmeal, quinoa, cream of wheat, Farro, and other whole grains and dried beans. It has a simmer function for pastas and soups! And it has a steamer basket that loads in the top, so you can cook veggies, meats and fish right along with your rice and grains. It’s a one stop meal maker!

It seemed like just trying the rice cooker on boring old rice would be a waste of an opportunity, so I went whole hog and made Shrimp and Grits.  And you know what?  It was GOOD!  And so simple.  This rice cooker is a pretty amazing piece of technology, and in a day when my afternoons are increasingly busier, the thought of being able to throw my entire meal into my rice cooker, is pretty appealing.

Want to hear the best part?  Hamilton Beach would like to offer a 4-20 Cup Rice and Hot Cereal Cooker (although, I think it should be called The Everything Maker) to one lucky Chew Nibble Nosh reader!  I’ll talk more about that later.  On to the recipe…

To start, I measured out my corn grits with the rice cooker measuring cup, chopped up a long link of spicy Andouille sausage, got some chicken stock ready, and prepped my fresh shrimp.

I poured the grits, chicken stock, some water, the sausage and some salt and pepper into the pot of the rice cooker and gave it a good stir.

Then, I tossed my shrimp with a hefty dusting of Creole seasoning.

I placed the shrimp in the steamer basket of the rice cooker, and placed it in the cooking pot, resting just above the grit mixture.

Then, I simply set the cooker to cook on the HEAT/SIMMER setting for 90 minutes, and I walked away.

Before the time was up, I chopped up some green onions and defrosted a handful of frozen corn, just to give the grits some extra kick.  And, if you’ve ever had “good” grits, you know that there’s likely some butter and cheese involved.  So, I grated up a block of sharp white cheddar cheese, and set aside a stick of butter too.

When the timer went off, I was really eager to see how this worked!  I popped the lid open and…

They look kind of perfect, don’t they?  Wow!

And then I removed the shrimp basket and stirred my butter, cheese, corn and green onions into the perfectly cooked andouille grits.

You know what, guys?  This rice cooker can COOK!  What a delicious and simple meal.

If I’m being completely honest, I think I’d add the shrimp later in the cooking game if possible, just so they wouldn’t overcook.  That was my biggest worry with this recipe.  The shrimp were very tasty and well seasoned, and definitely not the most overcooked shrimp I’ve ever had.  We ate them, no problem. But, if I was in a time position where I could be around to add them later in the game, I’d do that.  For a quick and simple one-pot meal, though, this was a definite winner, and I’d make it just like this over and over again in a pinch.

The grits were creamy and delicious, and studded with the smoky sausage, corn, onions, and just enough spice.  The flavors all played together really well, and as I was enjoying my dinner, and watching my family enjoy their meals, I couldn’t help but think about what an awesome gadget this rice cooker is.

And now, I get to share one with you!  Would you like your very own Hamilton Beach 4-20 cup Rice and Hot Cereal Maker?  Just enter the giveaway below!  Good luck!

*This post was written by me for Hamilton Beach.  All opinions expressed are my own.  Hamilton Beach provided the rice cooker for my use and review.