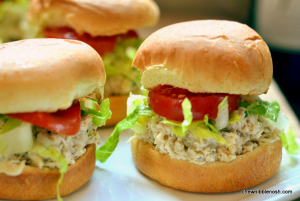 Do you use your slow cooker in the summer?  Not every slow cooker meal has to be a rich, wintry stew or chili.  Summer time is actually the best time of year to bring your slow cooker to life!  Not turning on the stove or the oven means less heat in your kitchen.  And, when you’re chasing little ones around the pool during the day or carting kids from activity to activity, or camp to camp, having dinner ready to go and practically just waiting for you to dive in can make life a whole lot happier!

These little sliders are really tasty, but even if your kids turn their noses up at Caesar salad, they may very well dive head first into these little sandwiches.  When my girls asked what we were having for dinner, I told them…with a hint of hesitation in my voice, because I was sure they would make those whiny gagging and wretching noises we all know and love when they hear that something’s for dinner that they don’t want.

Sure enough, both of them headed right into, “OH NO!  UGH!!! BLECH!  WE HATE CAESAR SALAD!  UUUUUUUUUUUUGH!  WAAAAAAAAAAAHHH!” mode.  I replied with my usual mantra, “Just try it…sigh.” 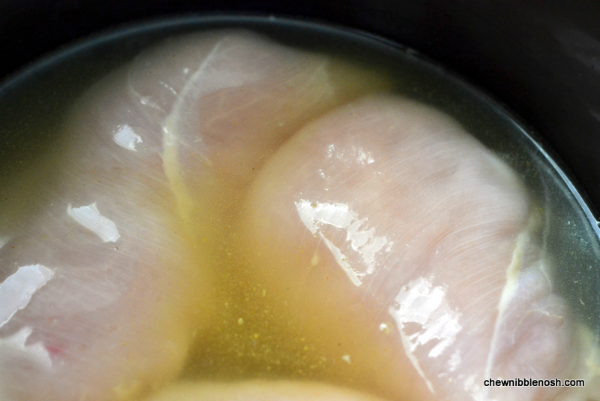 That’s it, in the beginning!

The chicken needs to cook for 4-6 hours, so it’s just enough time to run everyone around, or in my case this day, hang out at the pool with friends and family for a while.

About a half hour before you want to eat, remove the chicken from the broth and shred it.  It was about this time when I remembered a trick I’d heard about for shredding chicken.  I’ve spent time before picking apart chicken with two forks, shredding it into perfect shreds.  That can be kind of tedious.  A friend had told me that if you put cooked chicken breasts into the bowl of a KitchenAid mixer, and beat it up a bit with the paddle attachment, that you were left with perfectly shredded chicken.

I decided to give it a try. 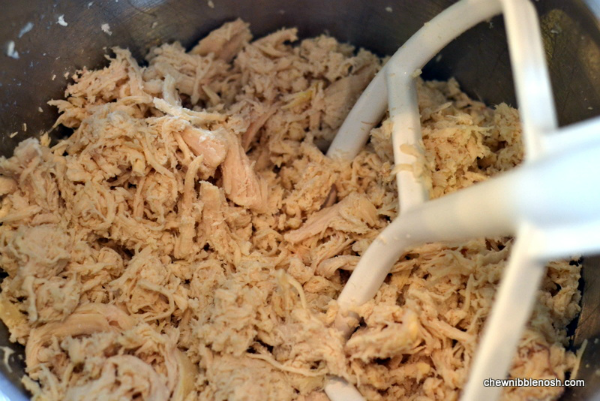 IT WORKED!  And, it took about five seconds in the mixer.  Bonus!

Once the chicken was shredded, I added it back into the slow cooker.  To the chicken, I added some Caesar dressing (Choose a creamy kind…I used Briana’s Asiago Caesar.  It’s my bottled Caesar dressing of choice!), some shredded Parmesan cheese, and some chopped fresh parsley.  How much dressing you’ll need will depend on both personal taste and how dry the chicken is.  I ended up using about a cup of the dressing.  I made sure that my chicken was well dressed, but not overdone and mushy. Think of the Caesar dressing like the BBQ sauce you’d add to pulled pork.  To each his own. 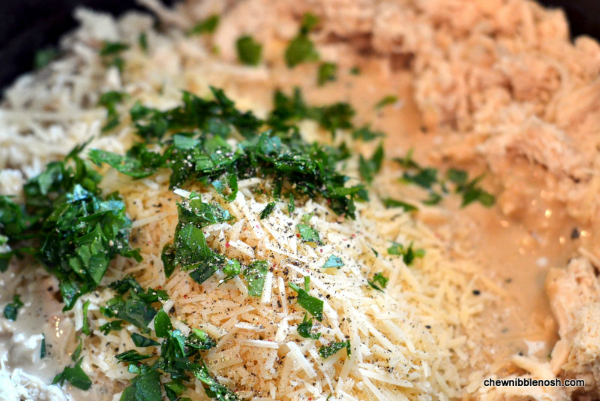 I stirred that all in, popped the top back on the slow cooker, and let it cook on low for about 30 minutes more, until it was well heated through.

At this point,  you can taste it and season with salt and pepper, or extra dressing as you see fit.

I toasted up some slider rolls in the oven, sliced up some tomato, and shredded some Romaine lettuce, and then I was ready to build some sandwiches. 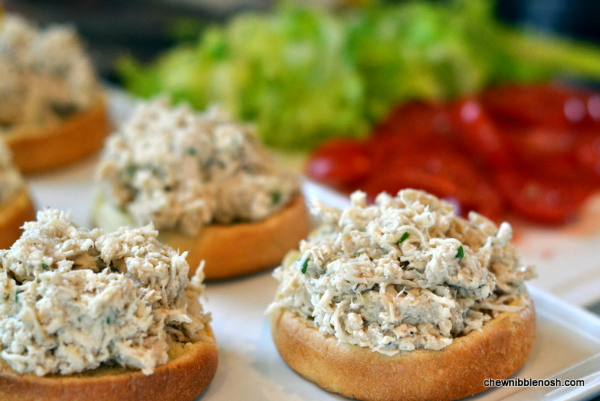 I served them up to my family, and the two youngest members looked at me like I was punishing them.  They got one last whimper in, and then each took a bite.  You know what?  THEY LIKED THEM!

Avery, my picky-picky-picky one scarfed down two of them.  Emily ate one, but agreed that I wasn’t trying to kill them, after all.  She eats like a bird, so getting one sandwich in her was a huge victory.

They were really tasty little sandwiches!

The next day, I had some leftover chicken atop some romaine with a little extra dressing, and treated myself to a delicious Chicken Caesar Salad.

This is one of those great recipes to have on hand when a crazy day comes your way. I think I’m going to make sure I always have an extra bottle of Caesar dressing in the pantry from now on! 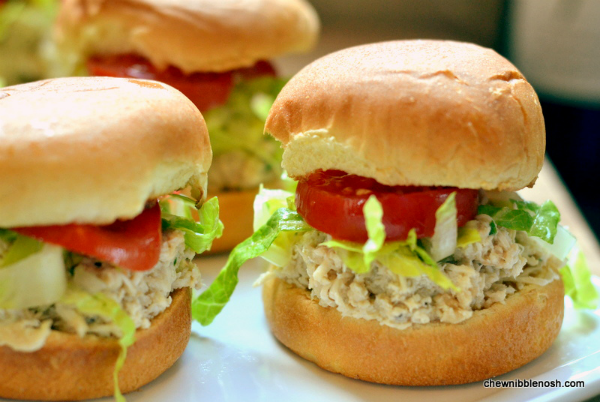 Adapted from The Girl Who Ate Everything