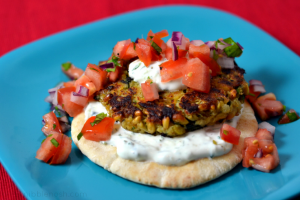 My husband is not a veggie burger guy…at all.  I can’t keep track of how many times he’s given me that “Why would you do that?” look in a restaurant as I order a veggie burger over something else, anything else, on the menu.  I love a good veggie burger, but have found that really good veggie burgers are like finding a needle in a haystack. The restaurant burgers I’ve tried run the gamut from delicious and hearty to mushy and meh.  It’s hard to find a really, really good one.   I’ve tried a few different versions at home, and I’m pleased to announce that this is the first one we all went nuts over, my husband included.

These are so tasty, and different.  And if you’re into Mediterranean flavors like I am, you’ll really enjoy this.  They are so flavorful on their own, but when you throw in creamy cool Tzatziki and this fresh tomato salad on top, you have a winner.

I started by sauteing some fresh spinach just long enough until it was wilted, and then I set it aside.  I added some more olive oil to the pan and softened an onion until it just started to caramelize, and then added in some garlic. Then, I threw in a half cup of Freekeh. 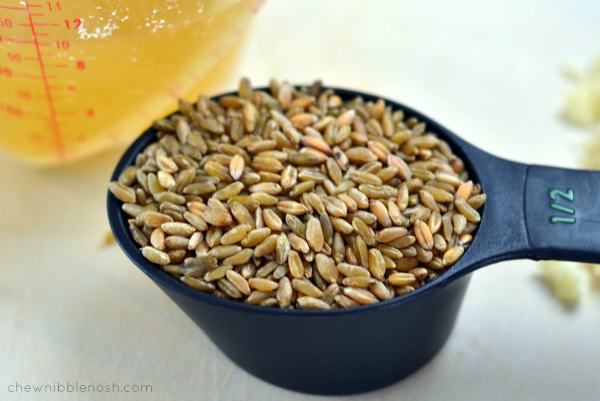 Have you ever heard of Freekeh?  If I’m being completely honest, I hadn’t either.  But I’m always up for trying something new, so when the recipe called for it, I sought some out in the bulk section of my local organic market.  If you like wheat berries or other grains with a bit of bite (texture, not heat), you’ll like Freekeh.  (Side Note:  If you’re nine, you’ll think the name is hilarious, and walk around the kitchen singing a song about it.)

I added the Freekeh to the onion and garlic, poured in some vegetable broth and brought it to a boil, and then let it cook for about twenty minutes. 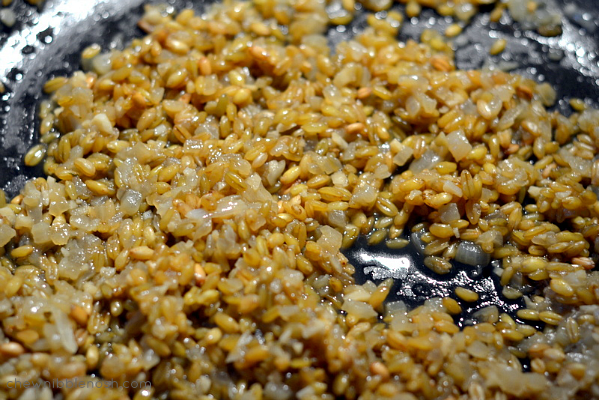 At that point, the broth had been absorbed and the Freekeh had that great grainy bite I was looking for.

I let the Freekeh cool for a few minutes and, while it was sitting, chopped up some parsley and my cooled spinach, zested a lemon, juiced the lemon, and chopped up some sunflower seeds. 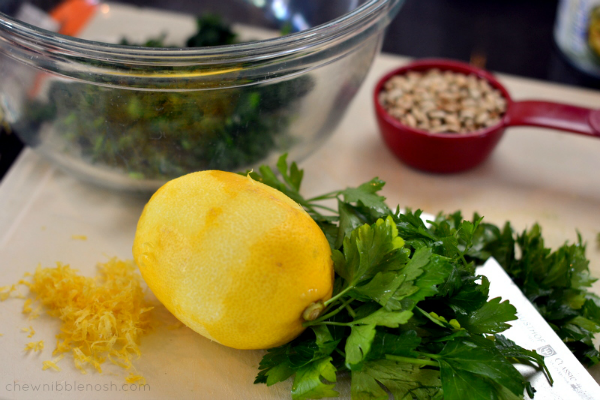 After ten minutes, I mixed together the Freekeh, a can of drained chickpeas, the sunflower seeds, some Panko bread crumbs, the lemon juice and zest, the spinach, and a bit of cumin and coriander.

I mashed the mixture together with a potato masher until the chickpeas were broken up but still a little chunky. 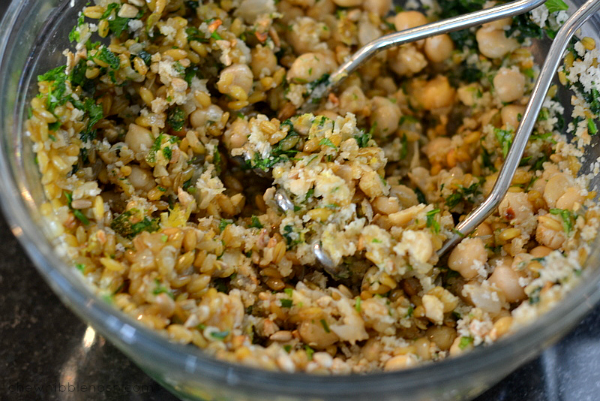 I seasoned the mixture with salt and pepper and then stirred in a beaten egg to help bind the mixture together, and popped the bowl into the fridge to chill.  You could make this mixture up ahead of time and chill it up to four hours.  I left it in for about thirty minutes.

While the burger mixture was chilling out, I threw together a quick, cool Tzatziki sauce and a light, fresh tomato salad chock full of beautiful summer tomatoes, red onion, parsley, and lemon. 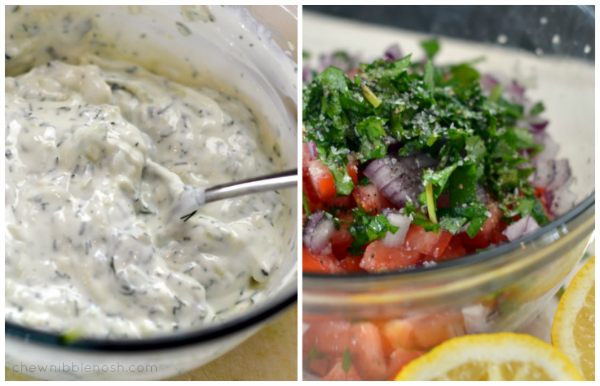 When it was time to build the burgers, I grabbed the chickpea mixture from the fridge, and portioned out the mixture first, before forming them into 3/4 inch patties. 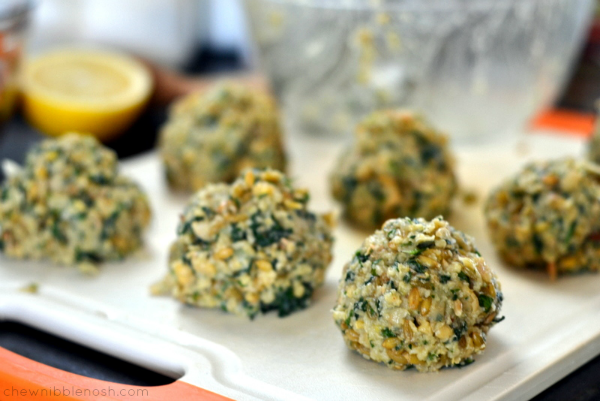 Just looking at this picture, you can see that these aren’t your average mushy veggie burger.  There’s a lot going on in there!

I cooked the burgers carefully on the stove top, flipping gently after each side browned up.  They cooked for about 4-5 minutes on each side, and I had to cook them in two batches, so I kept the already cooked burgers warm in the oven before serving. 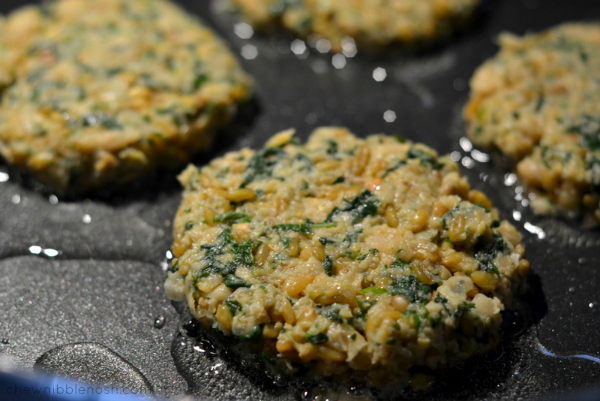 When the burgers were done, I spread some of that awesome Tzatziki sauce (that I swear, I could dip pretty much anything in) over some toasted pita bread.  Then, I placed a burger on top, and spooned a hefty serving of the tomato mixture over the top.

Throwing this meal together took a little more time than simply ordering a veggie burger at a restaurant, but the result was definitely worth it.  And my husband went back for seconds!  The burgers are delicious, packed with tons of flavor and texture.  The sunflower seeds, chickpeas and Freekeh give it the perfect hearty bite, and the cool Tzatziki and tomatoes take an already really tasty burger to whole a new level. 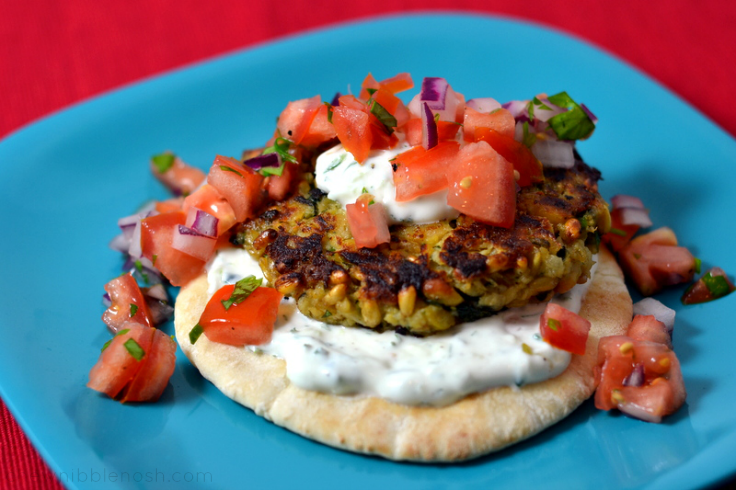 Middle Eastern Chickpea Burgers
Recipe Type: Vegetarian
Author: Adapted from Fine Cooking
Prep time: 1 hour
Cook time: 30 mins
Total time: 1 hour 30 mins
Serves: 8
You can make bits and pieces of the recipe up ahead of time! The burger mixture can be chilled for up to four hours before you press it into patties, and the Tzatziki sauce can be made a few hours ahead of time as well, and kept in the refrigerator until serving time.
Ingredients
Instructions
For the Burgers:
For the Tzatziki:
For the Tomato Salad:
3.3.3070