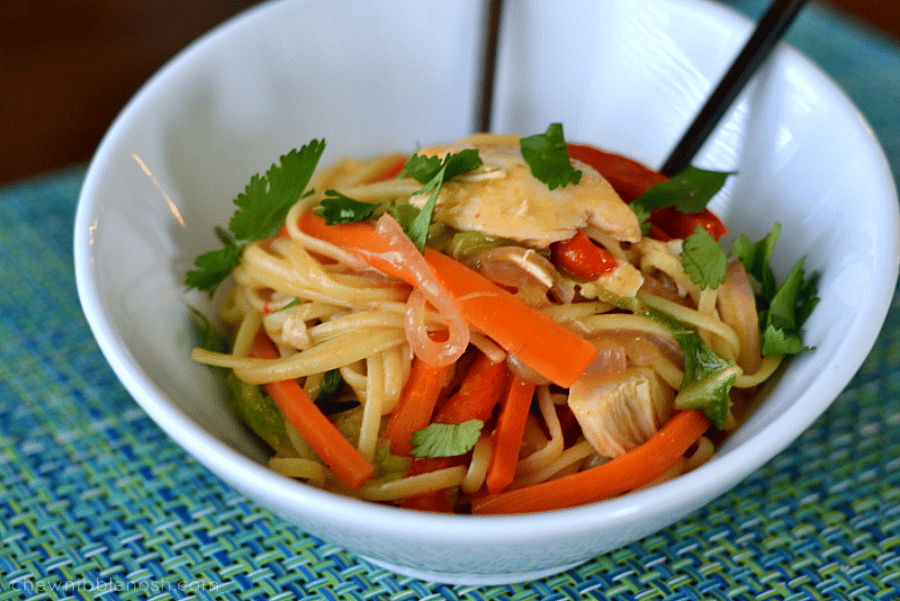 One pot does it all! Veggies, pasta, and sauce all cook together and a delicious, colorful, healthy family meal comes together in no time. Spice things up with a little dash of Sriracha, if desired. Or go vegetarian and leave out the chicken if you like!

I’m excited to be working on the blog again, after Chew Nibble Nosh has basically been in a holding pattern for the last few months.  My friend and I were putting some finishing touches on a new design, in hopes that the site is much more accessible, functional, and user-friendly.  Pictures are bigger and brighter, recipes are easier to find and print off, and the site should load a lot faster than before…among other things.  Honestly, the new design is kind of like a treasure trove, and I need play around with it for a bit, so expect things to change a bit in the coming month or so.  It’s still a work in progress, but it’s live!  So, here we are. Thanks for being so patient. It’s a new day, on a new updated site, so let’s start talking about a new recipe!

If you’re anywhere on social media lately, I’m sure you’ve run across pictures and videos of these miraculous “One Pot” meals, where everything for the meal, usually including dry pasta, is thrown into a pot and cooked together, saving time and looking like a fabulous option for those of us who grow increasingly busier by the day.  If I’m being honest, I haven’t heard many positive reviews of them. A few friends had tried them, and reported back to me with complaints that the liquid boiled out before the pasta could cook, or that the veggies were mushy by the time the pasta was cooked, and the overall flavor was pretty flat. I’d had a couple of friends ask me if I had a One Pot recipe that actually worked.  And I didn’t, until a couple of days ago.

I have to admit, I was a little skeptical when I came across the recipe for these Coconut Curry Noodles, but then I read it from start to finish, and thought that it might just work.  There was a lot of flavor going on, strong flavors like red curry paste, ginger, and coconut milk. The veggies were sturdy, and those that weren’t, were stirred in at the very end. And the proportion of liquid to pasta seemed like it wouldn’t be a problem.  The only thing I thought it was missing was a little protein, so I decided to add in some sliced rotisserie chicken.

Obviously, if everything is going in one pot, you really have to be on top of your prep game before you start, and everything needs to be sliced and diced beforehand. 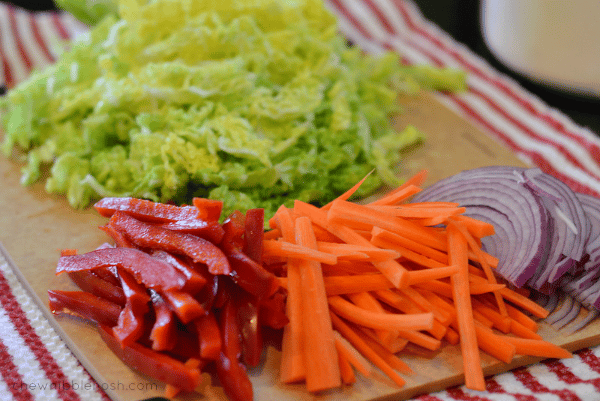 Looks like the perfect meal for a beautiful spring day!

Once the veggies were prepped, I mixed together the ingredients for my “sauce”.  This is the liquid that the dish, including the pasta, was going to cook in, so I wanted to make sure it was well blended and seasoned.

I combined a cup of Light Coconut Milk, three cups of vegetable broth (feel free to use chicken broth), a rounded tablespoon of red curry paste, and a couple of teaspoons of refrigerated ginger paste. 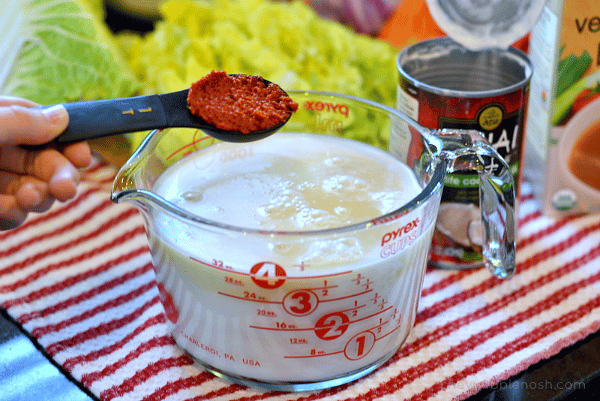 Then, it was time to load up the pot.  I poured in my liquid, and added in six ounces of linguine (just under half a box), the carrots, pepper and red onion. 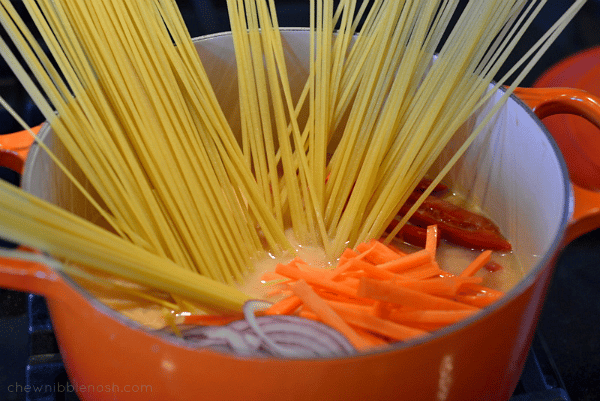 I cranked my stove to high and let the liquid come to a boil. As the pasta softened, I carefully stirred the mixture, making sure all of the dry pasta got into the sauce. Then, I let the pot bubble away for about eight minutes, turning the noodles and veggies occasionally just to make sure those noodles didn’t stick to the pot. 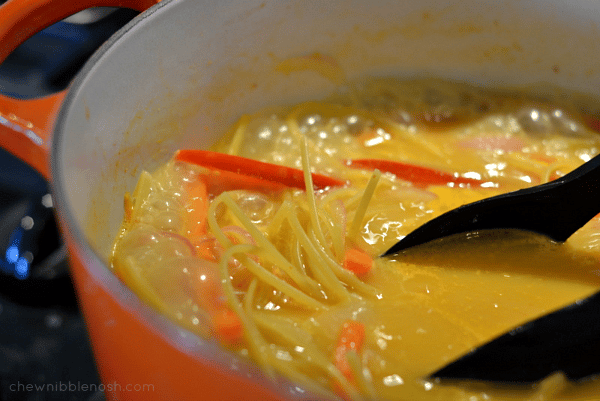 Once the noodles were just about done, I added in the sliced cabbage, and turned it carefully into the sauce until it was all mixed in. It doesn’t take long for the cabbage to wilt down. 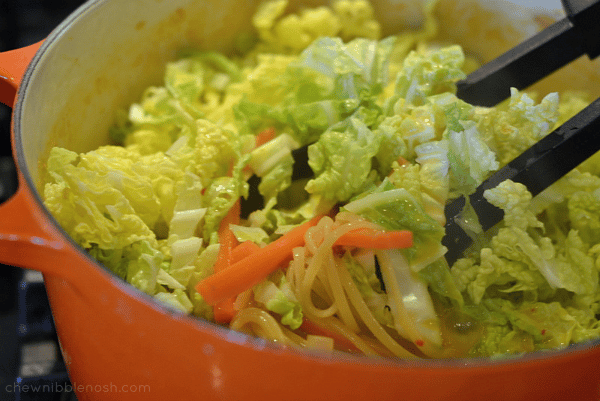 I cooked the mixture for a minute or two more, until the noodles were done to my liking, and then finished the dish off by stirring in some fresh lime juice and zest, a dash of salt, and the sliced chicken I’d set aside. 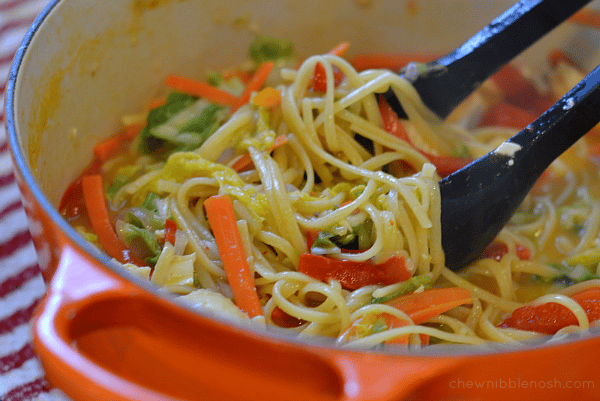 Can you see the sauce?  No dry noodles and veg here!  The coconut milk and broth had thickened into a silky, delicious sauce for the noodles and veggies, and the last-minute lime juice and zest gave it a huge punch of fresh flavor, right at the end.  No blah, flat noodles here.  I sprinkled a bit of chopped cilantro over the top and we were ready to go.

After going into this dinner with a bit of skepticism, I have to say that I was really pleased.  The veggies weren’t mushy or overcooked, in fact the carrots were perfectly crisp tender, and yet the pasta still had the perfect bite.  The sauce was zippy, and had thickened nicely as it cooked. It was full of coconut curry flavor, but could certainly be taken up a notch if you really like your spicy, with a good dash of Sriracha once it’s in your bowl. My entire family thought it was really tasty, and it will definitely be put into dinner rotation around here in the coming month, as May kicks off and life officially gets crazier.  (Am I the only one whose schedule EXPLODES every May?  I don’t think I am.)

Hope this opens up some time for you, come Crazy May.

This meal is delicious! A friend brought this by as a meal after I brought my second baby home. It was so good and my toddler ate it up. I asked for the recipe so I could make again. I prepped this meal on Sunday to make on Monday (last) night. I doubled the recipe so I could save one portion for the freezer. Since I had to prep in advance, I did not cook the ingredients in stages. I dumped it all in one pot, including raw pieces of chicken breast, but waited to add the noodles until I was ready to cook. When I got home from work with two kids in tow, I took the pot out of the fridge and let it heat up and start to cook. Then I added the noodles for about 10 minutes. It couldn’t have been easier and was just as delicious as we all remembered. It’s a little mild for my taste, but perfect for my toddler. So to my bowl, I added a drizzle of sriracha and a little spoonful of sambal oelek. Yum! I had leftovers for lunch today and I wish I had 6 more bowls. This will be added to our meal rotation!