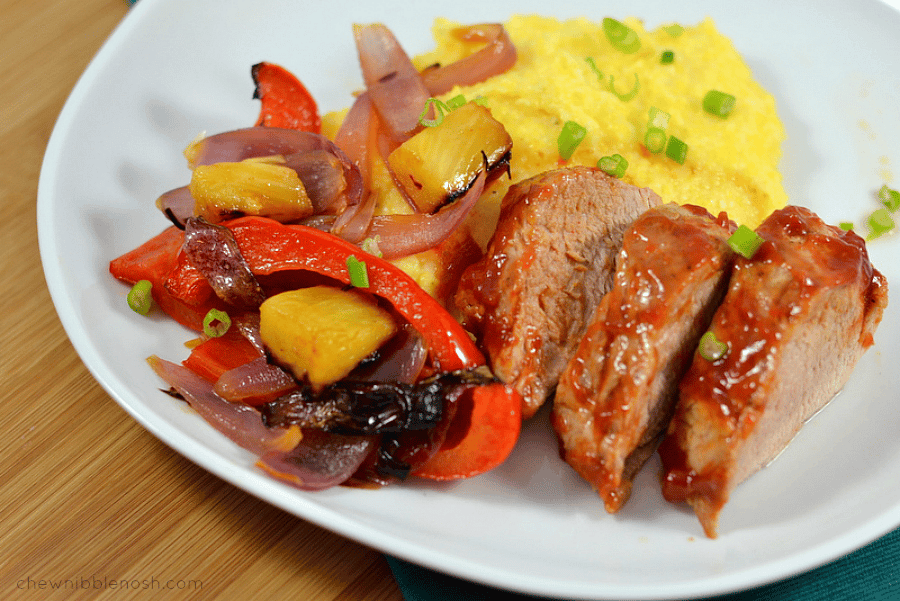 Sweet and Smoky Pork Tenderloin with Pineapple and Peppers 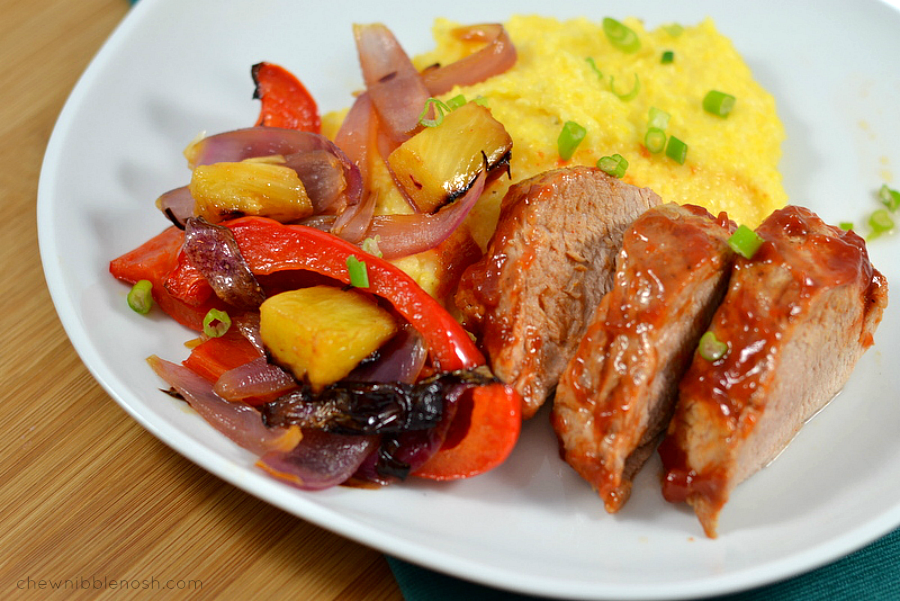 Sorry, guys.  I know I’ve been a little lax lately in sharing new recipes with you.  Summer is TOUGH, though!  I’d love to say our summer schedule is nothing but laziness, pool days, and endless time, but anyone with kids knows that it just isn’t. We’re having a great summer so far, but it’s keeping me on my toes, and unfortunately, not in the kitchen (or at the computer) as often as the obsessive-compulsive blogger part of me would like. I know you’re busy too, so I’m sure you understand. Don’t give up on me.  I’m still here!  Just making my way through the season.

This simple, summery pork tenderloin dish won’t throw a wrench in your summer day, though.  It comes together easily, is fresh and healthy, and is really quite tasty. Especially when you are having so much “summer”, you can’t quite “kitchen”.

I started by cutting up a red bell pepper into large chunks, following suit with some fresh pineapple, and a red onion.  I tossed those in a bowl with some olive oil, salt, and pepper. 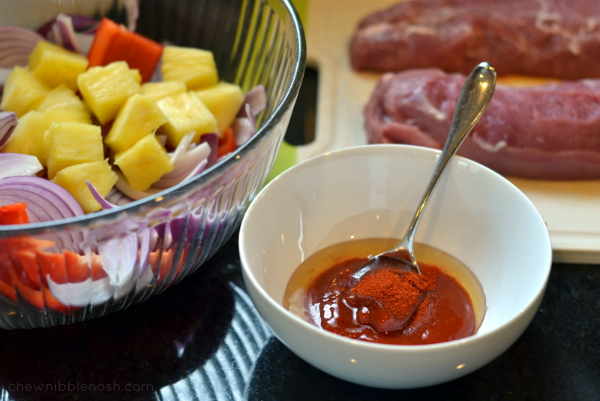 The onions, peppers, and pineapple went into the oven for ten minutes to start roasting, and while that was happening, I browned my tenderloins up on the stove top.

Once the ten minutes were up, I moved my tenderloins to the baking sheets with the roasted veggies, and then spread half of the glaze mixture over the pork. 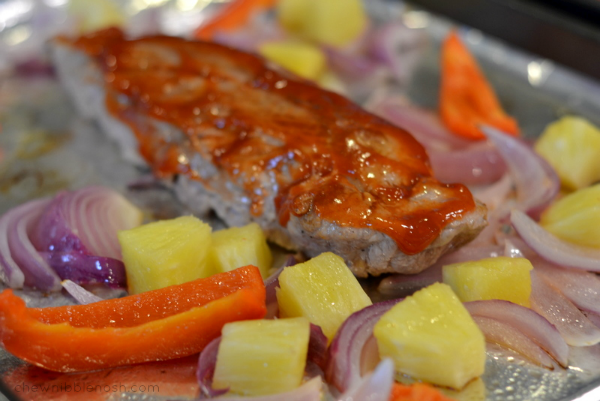 Then, the pork and veg went back into the oven to roast for about fifteen minutes more, until the internal temperature of the pork was 145*F, and the onions and company were caramelized and super tasty.

I moved the pork to a cutting board, spread the rest of the glaze on top, and allowed the pork to rest for about five minutes before slicing into it.  Letting the meat rest helps all of those juices settle inside the meat, instead of all over your cutting board when you slice into it. 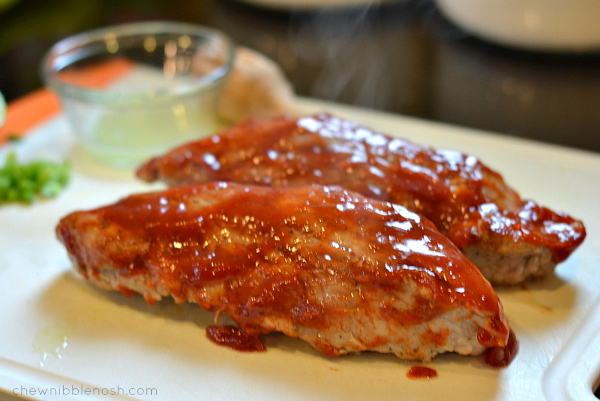 I tossed the vegetables with some fresh lime juice, just to give them one more burst of fresh flavor, and then sliced up the pork, and heaped the veggies alongside.  I served it with some quick cooking polenta, and we had a delicious, fresh summer meal in no time flat. 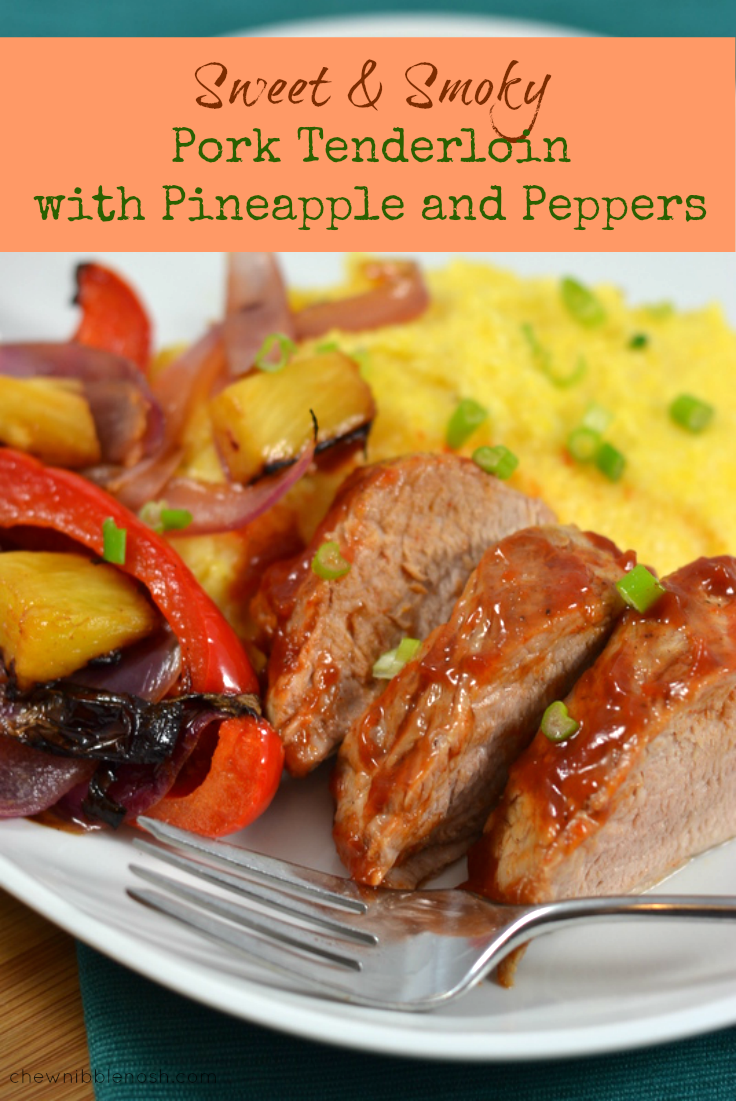 SWEET AND SMOKY PORK TENDERLOIN WITH PINEAPPLE AND PEPPERS